We're interested in the evolutionary and genetic factors that affect organismal diversity.

Our lab is primarily focused on studying the evolutionary history of species, populations, and individuals and the molecular evolution of gene regulatory regions and conserved genomic loci. To address questions in each of these areas, we generally use non-model organisms, and because we work with non-model species, we also develop and use genomic and computational tools to facilitate our work with these organisms.

Much of our work is integrative or cross-disciplinary - we use theory and tools from the fields of evolutionary biology, computational biology, molecular biology, organismal biology, genetics (few genetic regions), and genomics (many/all genetic regions) to help us address our questions. Below are general descriptions of several federally-funded projects on which we're currently working. Additional details regarding student research in the lab can be found on the People page. If you have any questions about these projects or any of our other work, please contact us.

Evolutionary history of vertebrates and the molecular evolution of ultraconserved loci 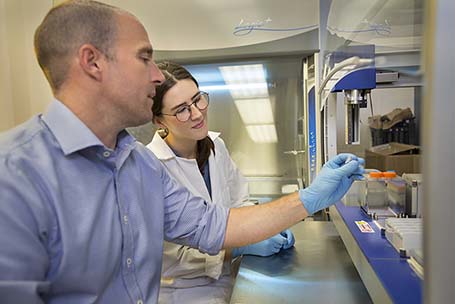 Brant and Jessie working with the robot in the lab at LSU.

During the previous ten years, one component of our research has focused on collecting and analyzing data from conserved genomic elements (CGEs, CNEs, UCEs, etc.) to (1) demonstrate that these loci encode evolutionary history and (2) infer the evolutionary history of vertebrate groups. During this time we have developed computational techniques to identify ultraconserved elements across divergent, organismal genomes [17]; laboratory techniques to collect ``genome-scale'' data from UCE loci [18,25,37,62,69,71,79]; and computational approaches [35] to analyze the resulting UCE data sets (100-400x the size of previous efforts). We have shown that UCEs are universally conserved within major taxonomic groups like amniotes and ray-finned fishes [18,25], and we have demonstrated that UCEs record sufficient evolutionary history to reconstruct phylogeny [17]. We have combined our identification of UCEs with target enrichment, library multiplexing [22,87], and massively parallel sequencing to demonstrate that UCEs contain and are flanked by variable and informative sequence, even at the population [27] and individual-levels [18]. We have also demonstrated that the general UCE enrichment approach is useful for inferring the evolutionary relationships outside of vertebrates (e.g., in arthropod lineages [61,65]), and Brant recently finalized a set of computational methods [65] that generalizes the UCE identification and bait design pipeline to work with any organismal group having some genomic information.

By combining these techniques, we have addressed several historically contentious evolutionary hypotheses including the phylogenetic position of turtles [20,38], the relationships among species comprising the Neoaves [24,36], the origin of oscine passerines [54], the branching order of the early diverging teleosts [25], the monophyly of flatfish [55], and the origin of passerines [83]. The approaches that we have created are used by hundreds of laboratories studying vertebrate and invertebrate groups, and the studies by our group using these approaches have been published in journals like Systematic Biology, Science, Nature, and PNAS.

Now, we're turning that paradigm one its head, a little bit, by using what we know about evolutionary history to examine the evolutionary behavior of conserved genomic elements (CGEs, CNEs, UCEs, etc.) and to test for relationships between UCE evolution, evolutionary innovation, and vertebrate diversification.

Limb loss or limb reduction has independently evolved 25 times in squamates, yet our understanding of the genetic mechanisms underlying these changes in the squamate body plan are incomplete. For example, we do not know if the loss/reduction of limbs is driven by changes within coding sequences or by changes in regulatory regions affecting coding sequences (or both). Similarly, we do not know if changes in a handful of the same genes (or regulatory regions) are responsible for similar limbless phenotypes across the squamate tree or if there are different suites of genes (or regulatory regions) driving convergence in the limbless phenotype.

We are working with a group of collaborators (Doug Menke and Travis Glenn at UGA; Carlos Infante at UC Denver) to study the evolution and function of enhancers associated with embryonic limb formation in lizards. Specifically, we are combining specimen resources (frozen tissues), new specimen collections (for missing lineages), and genome sequencing approaches to identify and characterize enhancer regions and genes associated with limb formation from trios of limbless squamate taxa. We are then using a suite of comparative analytical techniques to examine the pattern and frequency of regulatory and gene sequence divergence in these taxa, which should reveal whether convergent, limb-reduced morphologies are driven by similar or different genetic underpinnings. Finally, we plan to functionally test a subset of promising regulatory regions using mouse reporter assays and/or CRISPR-Cas9. 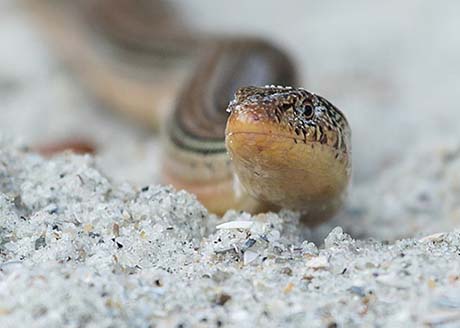 
OpenWings: A time-calibrated phylogeny of all birds 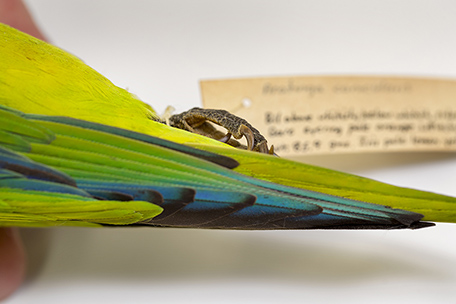 We have developed techniques for sequencing DNA from toepads similar to that seen on this specimen of Eupsittula canicularis. Image by Cody Willhite, LSU.

Ornithological research has led to substantial scientific advancements, and birds are emerging as a leading model system for comparative biology. Draft genomes of over 300 avian species are now available (see this paper on which our research group collaborated), and this resource is yielding insights into topics including genomic innovations, trait loss, adaptation, molecular convergence, and historical population decline. There are numerous projects expanding data layers for birds, including data on demography and abundance (e.g., eBird), song and vocalizations (e.g., xeno-canto), bill shape (e.g., MarkMyBird), plumage coloration (e.g., BirdColourBase), and CT-based anatomical scans/models (e.g., oVert). These genomic and phenomic resources will help mitigate long-standing obstacles to understanding the connection between genotypes and phenotypes in birds and other vertebrates. The fundamental and missing piece of this otherwise powerful comparative biology toolkit is an accurate and complete avian phylogeny.

As part of a collaborative group of museum scientists (AMNH, FLMNH, JFBM, KUBI, LSUMNS, NMNH), we are helping to coordinate the OpenWings project, which builds from our work developing UCEs as molecular markers [18,44], (2) developing methods to use these techniques with older museum specimens [31,44,92], and (3) inferring the evolutionary history of birds [24,36,46,49,54,83]) to infer the first complete, species-level phylogeny for a major vertebrate group: Class Aves.

Specifically, we are using UCE enrichment from tissues and toepads of avian museum specimens combined with massive, high-performance computing analyses of the resulting data to infer a time-calibrated phylogenetic hypothesis of all birds. With the tree in hand, we will then test several hypotheses regarding the temporal and spatial origins of birds.

An additional and exciting component of this research project is that we will be releasing the sequence data we generate to the scientific community in real-time, allowing other research groups to immediately use these data for studies addressing pressing evolutionary questions within focal clades of birds and allowing the immediate integration of released data with some/all of the phenomic resources described above.